VANCOUVER, British Columbia – (March 3, 2021) Oroco Resource Corp. (TSX-V: OCO) (“Oroco” or “the Company”) is pleased to announce the successful completion of the airborne component of a helicopter magnetics survey over the Santo Tomas Project (“the Project”), and to provide an update on the 3D induced polarization survey in progress on the Project.

Magnetics Survey. The Company has completed a helicopter magnetics survey performed by Terraquest Ltd. (“TQ”) using a high sensitivity cesium vapour magnetometer, a gamma ray spectrometer and TQ’s proprietary Matrix very low frequency electromagnetic (“VLFEM”) system. The survey was completed with the collection of 2,231 line kilometers of data with an east-west tie-line separation of 50 metres and a north-south tie-line separation of 500 metres. Independent quality monitoring of the survey is being provided by Condor Consulting, Inc. of Lakewood, CO. The Company expects to receive the processed magnetics, VLFEM and radiometric data from TQ within the next two months. The Company will then analyze the data to assist in the mapping of the sub-surface geology of the Project.

The Company has now relocated the survey team to the Brasiles Zone in the northern part of the grid and commenced the survey of the continuation of NNE striking, west-dipping, chargeability-high response which the 3D IP survey has already demonstrated extends from the North Zone to the prominent gossan of the Brasiles Zone. The Company is taking advantage of the current low water levels in the Huites Reservoir to collect data from previously inaccessible areas, and will continue the 3d IP survey for another 800 metres to the north. The Company may extend the survey further in the event that the Brasiles chargeability feature has not been closed off. Subject to such extensions, the DCIP survey is approximately 80% complete.

The relative outlines of the airborne magnetics and field-based DCIP geophysical surveys are shown in the map in Figure 1. 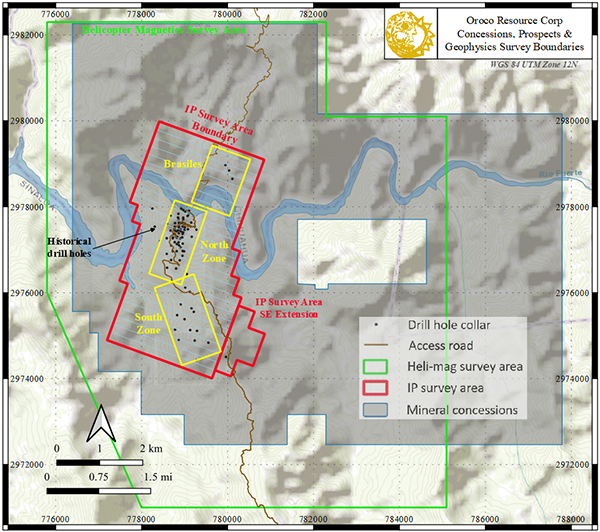 The Company holds a net 61.4% interest in the collective 1,172.9 ha core concessions of the Santo Tomas Project in NW Mexico and may increase that majority interest up to an 81.0% interest with a project investment of up to CAD$30 million. The Company also holds a 77.5% interest in 7,807.9 ha of mineral concessions surrounding and adjacent to the core concessions (for a total project area of 22,192 acres). The Project is situated within the Santo Tomas District, which extends from Santo Tomas up to the Jinchuan Group’s Bahuerachi project, approximately 14 km to the north-east. Santo Tomas hosts a significant copper porphyry deposit defined by prior exploration spanning the period from 1968 to 1994. During that time, the property was tested by over 100 diamond and reverse circulation drill holes, totaling approximately 30,000 meters. Based on data generated by these drill programs, a historical Prefeasibility Study was completed by Bateman Engineering Inc. in 1994.

The Santo Tomas Project is located within 160km of the Pacific deep-water port at Topolobampo and is serviced via highway and proximal rail (and parallel corridors of trunk grid power lines and natural gas) through the city of Los Mochis to the northern city of Choix. The property is reached by a 32 km access road originally built to service Goldcorp’s El Sauzal Mine in Chihuahua State.