VANCOUVER, British Columbia – (June 2, 2021) Oroco Resource Corp. (TSX-V: OCO; OTC: ORRCF) (“Oroco” or “the Company”) is pleased to announce receipt of the final data for its recently completed 3D IP geophysical survey at its Santo Tomas Project in north-western Mexico.  The survey results clearly correlate chargeability and resistivity features with known mineralization and alteration zones related to the mineralising events, and with geological mapping in the area of historical drilling and resource delineation.  Most importantly, the final survey data displays a very extensive distribution of the chargeability/resistivity features beyond the confines of the historical work at Santo Tomas.

The final dataset indicates a substantial continuation of Santo Tomas chargeability along strike and to depth, inferring that the mineralized system is much more extensive than was defined historically.  In addition to the strike continuity, chargeability features at South Zone and Brasiles protrude east of their anticipated distribution, and a distinct feature of intermediate chargeability is developed westward below a mapped limestone bluff at Brasiles.

3D DCIP: The final survey report for the deep, three-dimensional, Induced Polarization ("DCIP") geophysical survey by Dias Geophysical of Saskatoon, Saskatchewan ("Dias"), was received on May 28, 2021.  The survey was completed using a rolling, distributed partial 3D DCIP array and a distributed 2D array (at the South Zone extension), both with a pole-dipole configuration.  The full survey covered an area of approximately 14 km2.

Commenting on the completed DCIP report, the Company’s CEO, Craig Dalziel, stated “Oroco is now highly confident that the close correlation between the DCIP results and our knowledge of the distribution of historically drilled mineralization provides the Company with a compelling basis for use of the DCIP results to guide the targeting of future drilling at the Santo Tomas South, North and Brasiles Zones.  The coherence of the DCIP, and the knowledge being gained by in-progress selective geological surface mapping, will ensure that drilling is most efficiently deployed.  The Company will maximise its significant investment in the DCIP survey with near-term integration of additional geophysics, comprising airborne magnetics, radiometrics and very low frequency electro-magnetics, along with a structural evaluation to be derived from the results of a LiDAR survey for which final results have just been received.  The region of the Brasiles Zone which comprises new data not previously disclosed is not only exceptional for its indication of NNE strike continuity of chargeability in the Santo Tomas system, but also for its indication of very high interest drill targets in the western areas of Brasiles.”

The northward extension of the survey highlights the continuation of a NNE striking, west-dipping, chargeability-high response which the survey had already demonstrated extends from the North Zone to the prominent gossan of the Brasiles Zone (refer to the full survey coverage in Figure 1).  The Company also took advantage of the current low water levels in the Huites Reservoir to collect data from previously inaccessible locations, and continued the 3D IP survey for another 800 meters to the north of the survey results reported on March 3.  A grid extension at the NE corner of the grid was surveyed to follow the continuing chargeability feature northeastward: the feature was not closed off despite the extension of the survey limits.

Based on the additional evidence of the now completed DCIP survey, the core of the mineralized intrusive complex exposures and inferred trend spans a collective distance of at least 5 km by a width of 1-3 km from the South Zone, the North Zone and Brasiles. It remains open on its western fringe, its NE extremity, and to depth.

Notable features at Brasiles include:

The Company intends to post a presentation summarising the important results and observations derived from the integrated DCIP data on its website within two weeks and will highlight the very compelling targeting and upside potential that the DCIP data presents.  The Company will also attempt to clearly illustrate the opportunity to target very significant additional tonnage among certain lateral chargeability extensions (South and Brasiles Zones) and where the strong North Zone anomaly extends to depth below the 700 m depth limit of investigation of the DCIP survey.

As an introduction to that presentation, the attached summary images are provided.  Figure 2 shows chargeability results at the surface draped on the Santo Tomas orthophoto model to illustrate the surface responses of outcropping mineralized zones.  Note the South, North and Brasiles Zone surface responses, corresponding to known mineralization and gossans.  Areas of low chargeability (blue) on the ridge tops are meta-limestone and SMO volcanic rocks (refer to www.orocoresourcecorp.com/projects/technical-reports/ ).

The largescale features defined in the survey are illustrated in Figure 3, where a stepped plan view employs a 600 m elevation slice of the chargeability model to illustrate the responses that connect below the meta-limestone cap of the South Zone.  The North Zone is better presented at the 100 m elevation slice, demonstrating the strong connection between the North and Brasiles Zones and the increase in the width of the response to depth.

The cumulative results of the Dias Geophysical 3D DCIP survey represent the beginning of a new generation of advanced exploration of the Santo Tomas deposit.  The final 3D models of Resistivity and Chargeability have a mesh size of 25 m by 25 m by 25 m.  This mesh size is appropriate, and at this resolution the data closely match historical drilling data, where available.  Confident targeting of the next generation of exploration and mineral resource definition drilling is now entirely feasible.

Notwithstanding the exceptional results of the May 28 final report by Dias Geophysical, the Company plans to integrate the DCIP data with data from the pending delivery of Terraquest's helicopter magnetics survey, gamma-ray spectrometer and VLF EM survey.  Results from ongoing geological structural mapping will be integrated in the near future.

LiDAR Survey: The Company has received the results of an airborne LiDAR survey flown by Eagle Mapping Services Ltd. of Langley, B.C.  The survey covered some 450 km2 and was timed to coincide with the low level of the Huites reservoir which has exposed most of the area normally submerged beneath the water retained by the Huites dam.  The survey was flown to recover data with sub-30 cm vertical and horizontal precision, and forms the basis for updated digital elevation models and derived map products (contour lines).  The survey has also provided updated orthorectified aerial photography of the project site.  The photography is instructive as the current drought has maximised surface feature visibility. 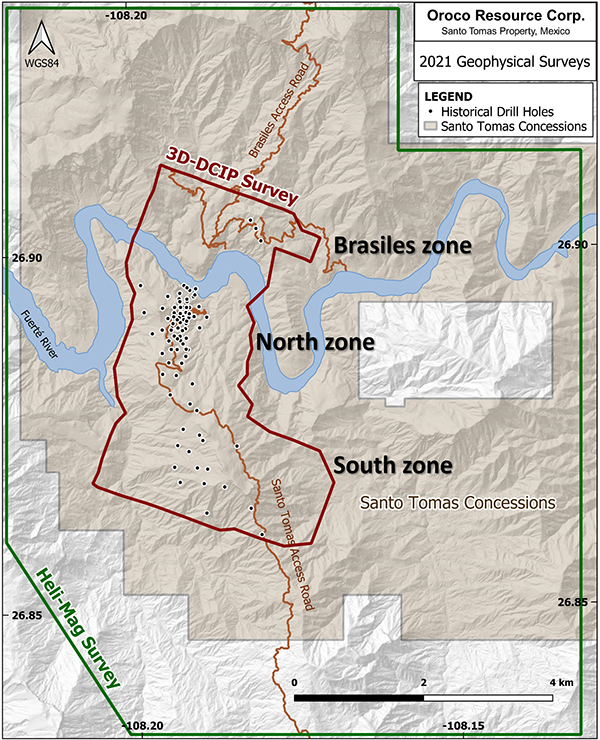 Figure 1. Location of the geophysical surveys at the Santo Tomás deposit area. 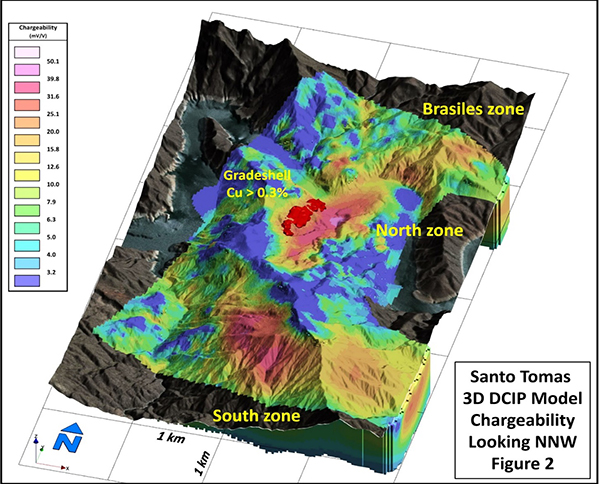 Figure 2. DCIP Chargeability Draped on the Orthophoto Base, Looking NNW 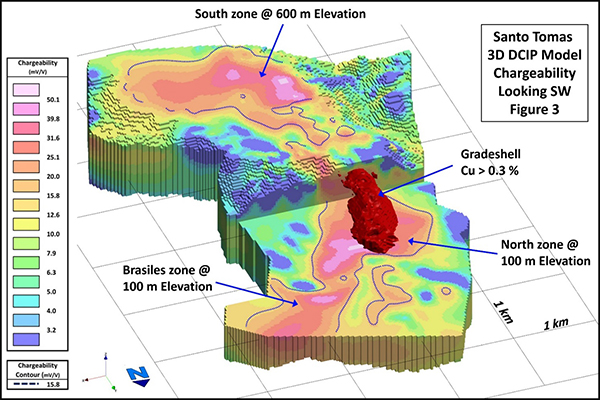 Mr. Paul McGuigan, P. Geo., of Cambria Geosciences Inc., a Qualified Person under NI 43-101 and a senior consulting geoscientist to the Company, has reviewed and approved the technical disclosures in this news release.

The Company holds a net 73.2% interest in the collective 1,172.9 ha core concessions of the Santo Tomas Project in NW Mexico and may increase that majority interest up to an 85.5% interest with a project investment of up to CAD$30 million.  The Company also holds a 77.5% interest in 7,807.9 ha of mineral concessions surrounding and adjacent to the core concessions (for a total project area of 22,192 acres).  The Project is situated within the Santo Tomas District, which extends from Santo Tomas up to the Jinchuan Group’s Bahuerachi project, approximately 14 km to the north-east.  Santo Tomas hosts a significant copper porphyry deposit defined by prior exploration spanning the period from 1968 to 1994.  During that time, the property was tested by over 100 diamond and reverse circulation drill holes, totaling approximately 30,000 meters.  Based on data generated by these drill programs, a historical Prefeasibility Study was completed by Bateman Engineering Inc. in 1994.

The Santo Tomas Project is located within 160km of the Pacific deep-water port at Topolobampo and is serviced via highway and proximal rail (and parallel corridors of trunk grid power lines and natural gas) through the city of Los Mochis to the northern city of Choix. The property is reached by a 32 km access road originally built to service Goldcorp’s El Sauzal Mine in Chihuahua State.

ABOUT THE DIAS SURVEY:

A total of 714,887 pole-dipole data records were processed and delivered from a total data set of over 2 million data points. Dipoles ranged in size from 100 m to 850 m, and the orientation of the dipoles ranged across all azimuths. Unconstrained 3D inversions of the final Resistivity and Chargeability data were generated using the SimPEG tensor mesh 3D DCIP code.  The final 3D models of Resistivity and Chargeability have a mesh size of 25 m by 25 m by 25 m.