VANCOUVER, British Columbia – (February 23, 2018) Oroco Resource Corp. (TSX-V: OCO) (“Oroco” or “the Company”) is pleased to announce that it has acquired, through its wholly-owned Mexican subsidiary, Minera Xochipala, S.A. de C.V. (“MX”), a 77.5% interest in each of the La China II and Amp. Santo Tomás Reduccion 1 mineral concessions from Santo Tomas Metals, S.A. de C.V. (“STM”), and a 77.5% interest in an application for the Papago 17 mineral concession from Ubaldo Trevizo Ledezma (“Trevizo”) of Choix, Sinaloa. In aggregate, the three properties (the “Properties”) comprise approximately 6,978 ha and abut and surround the Santo Tomas copper porphyry properties in Sinaloa, Mexico (the “Santo Tomas Concessions”). Please see the attached map for references.

The Company also holds a 13.6% equity interest in Altamura Copper Corp. (“Altamura”), a British Columbia company, and an option to acquire an additional 6.4% equity interest in Altamura. Through its Mexican subsidiary, Xochipala Gold S.A de C.V. (“XG”), Altamura has purchased the Santa Tomas Concessions from the registered owner of the property. An officer of the Company and a private company owned by the spouse of an officer of the Company are shareholders of Altamura. The Company and Altamura have no common directors, officers or control persons. Oroco is currently negotiating to acquire the remaining common shares of Altamura that the Company does not own.

Altamura has agreed that, upon the resolution of an existing legal dispute (the “Dispute”) between XG and a third party, certain affiliates of STM will receive a registered minority interest in the Santo Tomas Concessions.

While the negotiations to acquire the balance of the shares of Altamura are ongoing, there is no guarantee that the parties will reach terms that are acceptable to the Company and to the Altamura shareholders. Oroco will only provide an update on these negotiations if and when the parties reach an agreement regarding the purchase and sale of the Altamura shares. Similarly, the timing and substance of the resolution of the Dispute will determine whether XG is able to register its interest in the Santo Tomas Concessions. 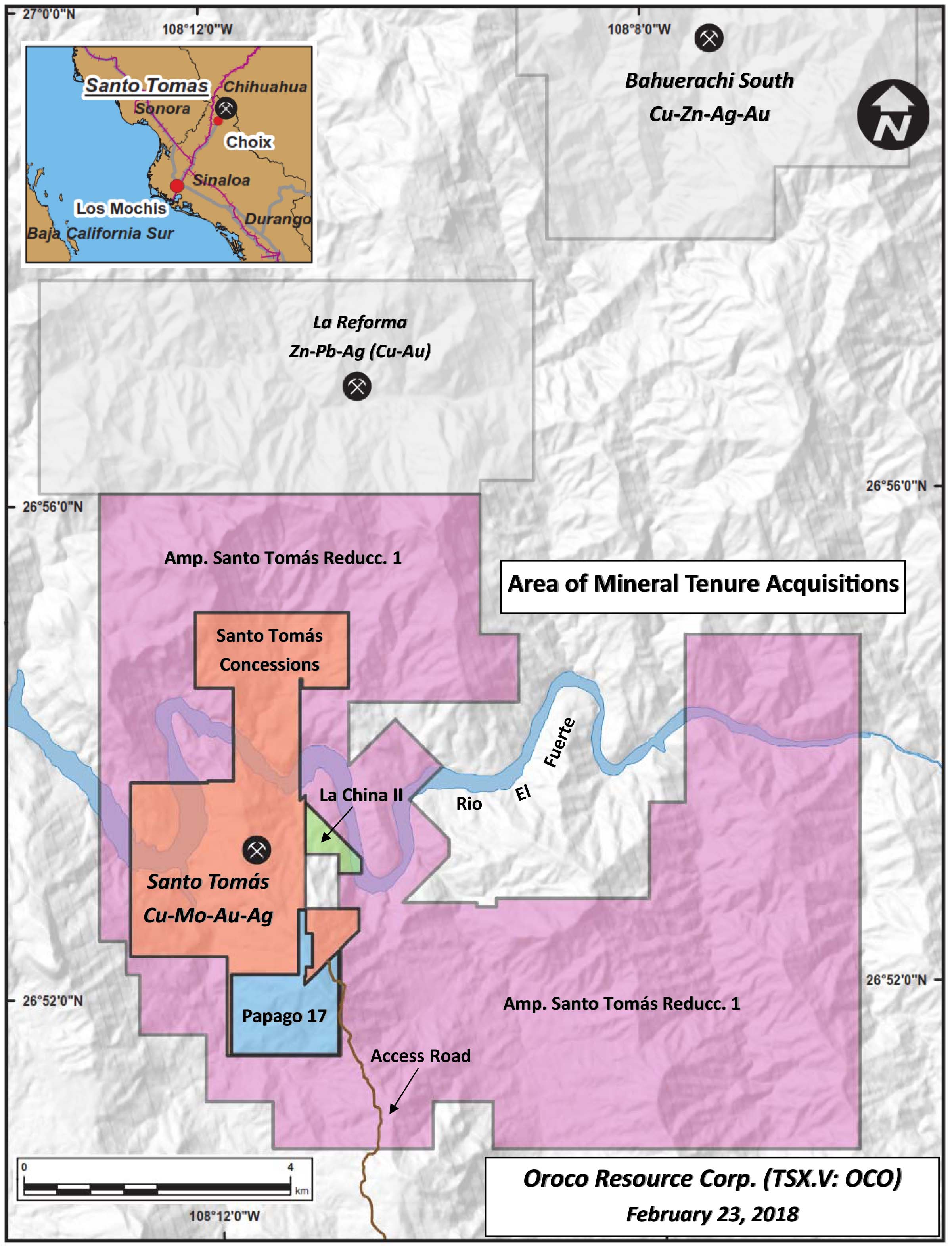 The Santo Tomás mineralization zone is mapped on surface and drill tested along a strike length of 4 km on the Santo Tomás Concessions and Papago 17 area. The Company has assembled information from historic diamond drilling, rotary and reverse circulation holes from exploration programs spanning 1968 to 1993. In 1994, Mintec, Inc. prepared a mineral resource estimate based on assay information from 14,881 meters of drilling in 49 drill holes drilled by ASARCO and Tormex–Peñoles, and 40 drill holes drilled by Exall Resources Limited (“Exall”). During that year, Exall commissioned Bateman Engineering Inc. (“Bateman”) to conduct an economic assessment of the Santo Tomás project, based on technical work by a team that included Mintec, Inc., Mountain States Research and Development, Inc., and Minetek S.A. de C.V. In July of 1994, Bateman completed this study, termed “Santo Tomás Project, Sinaloa, Mexico, Pre-Feasibility Study,” and did not use any inferred mineral resource estimates in its work. The economic assessment by Bateman contains favorable metallurgical test results and engineering designs that remain broadly acceptable today. However, the Company considers these historical economic studies and associated mineral resource estimates to be only conceptual in nature until confirmed by current technical programs.

In 2017, the Company initiated a program of mineral exploration in the Santo Tomás mineral camp with surface geological mapping and the assembly of historical drilling information on the Properties and the Santo Tomás Concessions. Additionally, Auracle Geospatial Science, Inc. (“Auracle”) was contracted to task MDA’s RadarSat 2 satellite for the acquisition of Synthetic Aperture Radar (“SAR”) data for the entire camp.

Phase One of the Company’s exploration work is now complete. Modeling by Auracle of the SAR data has confirmed and significantly enhanced the structural geology results from the 2017 field mapping by the Company. Historic drilling indicates a well-mineralized zone of quartz monzonite dikes and hornfelsed andesite of the Santo Tomás mineralization zone passes southward from the Santo Tomás Concessions onto the Papago 17 area.

The geological information contained in this release is approved by Dane A. Bridge, M.Sc., P. Geol. who is an Independent Qualified Person and who conducted surface geological mapping on the site of the Properties and the Santo Tomás Concessions in 2017.