June 26, 2020: "Welcome To The Age Of Copper": Why The Coronavirus Pandemic Could Spark A Red Metal Rally - CNBC 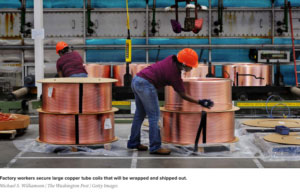 The coronavirus pandemic is set to pave the way for “the age of copper,” according to the director of energy, climate and resources at Eurasia Group, as governments double down on investments that will drive up demand for the red metal.

The commodity, which is widely seen as a bellwether for the general state of the economy, has taken a hit during the coronavirus crisis.

Slumping demand drove prices down at the height of the pandemic in March. However, benchmark copper on the London Metal Exchange was trading around $5,909 per metric ton Tuesday, up 0.5%. That’s close to its five-month high of $5,928 hit earlier this month, Reuters reported.

Eurasia Group’s Henning Gloystein said in a research note on Tuesday that the pandemic is expected to accelerate trends in government-supported environmental investments and digitalization, which “heralds a coming boom in copper demand.”

“Huge green and digital stimulus programs, especially in Asia and Europe, will create the conditions for a boom in copper demand — electric vehicles, 5G networks, and renewable power generation all require large amounts of the red metal,” Gloystein said.

Demand for copper could fall by as much as 5% in 2020 due to the pandemic-driven recession, he projected. But, widescale fiscal stimulus measures would help drive demand for the metal back to pre-crisis levels next year, he noted, with traders and miners expecting consumption to rebound by 4% in 2021.

Bank of America analysts increased their price forecast for the metal earlier this month, expecting prices to rise 5.4% in 2020 to $5,621 a ton. They kept their projection for 2021 unchanged at $6,250 per ton. The forecasts, they said, were down to “remarkable fiscal stimulus packages” and an expectation that there would be more purchases of raw materials as countries emerged from lockdown.

Analysts at Morgan Stanley also expect the sector to quickly bounce back to pre-pandemic levels, according to Reuters, with global stimulus measures, Chinese infrastructure spending and supply disruptions expected to boost demand.

According to Eurasia Group’s note, clean energy and digitalization programs were expected to push average annual growth demand for copper up by 2.5% this decade, which would likely drive consumption toward 30 million tons by 2030.

Policy changes in Asia and Europe would play an important role in the surge in demand, Gloystein said, with shifts in transportation expected to be the “biggest single driver of copper usage.”

“The electric vehicles industry currently makes up just 1% of copper demand. By 2030, many analysts expect that figure to reach 10%,” he said.

China was expected to invest hundreds of billions of dollars in digitalizing its economy over the coming decade, Gloystein noted, while countries all over the world had committed to massive investments in green infrastructure and electric vehicles.

“Copper will be a key input for virtually all the industries that are now being promoted,” he said. “Welcome to the age of copper.”

While Gloystein acknowledged that Southern Hemisphere nations with large copper mining sectors would key beneficiaries from rising copper demand, he noted that China’s influence in the industry could see it gain political leverage in both Australia and South America.

“The rise of the copper economy will have political implications,” he said. “China’s dominant position as a buyer of the raw material will likely give it more political leverage over copper mining regions.”

China is the biggest single user of refined copper in the world, according to Eurasia Group, with the country consuming around 13 million tons of the commodity last year.

Tensions between China and Australia have ramped up in recent years after the latter barred Chinese telecoms giant Huawei from its domestic 5G networks, supporting the U.S. in claims that the company’s presence in the infrastructure posed national security risks.

Relations have been damaged further recently by Australia’s government calling for an investigation into China’s role in the coronavirus outbreak, and by China slapping import tariffs on some Australian goods.

While there is some support among Australian lawmakers to recalibrate exports away from China, Gloystein noted that rising copper demand could limit the country’s ability to achieve this goal.

Meanwhile, Chinese influence would likely rise in Chile – the world’s largest exporter of copper – which is a participant in China’s Belt and Road trade initiative, he added.

“Chile’s sales to China already represent about one-third of total exports,” the note said. “Higher copper sales will likely increase this reliance and expose the country to Beijing’s political pressure in many areas, including in Pacific trade negotiations, the use of Huawei equipment, and relations with the U.S.”

The same, Gloystein warned, was true of Peru, which exports almost twice as many goods to China as it does to Europe or the United States.
Subscribe for Updates